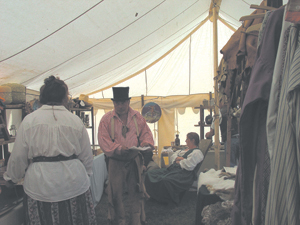 The Scouters from Troop #22 informed me at the October Roundtable that they would have a station set up during the Rendezvous at the Southwest Conservation Club over the weekend of October 9th. They also said that I should stop by and check out their efforts.

Saturday morning just before noon I pulled into the Conservation Club to investigate things. Before I had the door on my‑truck closed I recognized the deep report from black powder rifles back on the range. Since I had to begin looking for Boy Scouts somewhere on the grounds I decided to start back there. As I rounded the Clubhouse it reminded me of a step back in time. There were easily fifteen to twenty individuals dressed in accurate‑1840s circa clothing gathered at the rifle range and the guys did not seem to be having any trouble at all popping grapefruit-sized balloons from about 75 yards with their “smoke sticks.” I would like to have‑watched longer, but I was in pursuit of Boy Scouts so I had to maintain course.

The next leg of my search brought me back past the Clubhouse and the tantalizing aroma of cornbread, ham & beans, chili, and other fare almost ended my quest prematurely. A bit of self-discipline was required to keep me on course. But on course I was as I entered the first line of lodges.‑

That is, until I noticed the Indian Fry Bread and my discipline just plain surrendered. Fortunately it was another Scouter wearing the apron at the Fry Bread Lodge. Marcus Marquart (Marquarts Custom Creations) was able to give me some solid background on the whole Rendezvous scene. Even though I have known the Marquarts since the early 1960s, I really‑didn’t know how involved Marcus had been. His involvement dates back to his teenage years when he was the lead dancer for a Sioux group out of the Dayton, Ohio area. In the short time that it took for my Indian Bread to be served hot‑with cinnamon and sugar we talked and Marcus directed me down the first row of Lodges to where the Boy‑Scouts had set up.

Even though Troop #22 had been at‑the Haunted Castle until 1:00 am the night before, the unit had still beaten me to the Rendezvous. The Boy Scouts already had an area established and running. The Scouts had a bridge entryway lashed together with lashed tripods holding their perimeter rope up. Inside their perimeter they had a firing line for slingshots‑set up. They used iron skillets hung from rope as targets and they shot biodegradable dog chow as ammunition. The Scouts also had an early form of tic-tac-toe that utilized a stick matrix and used pinecones thrown as markers. Additionally the Scouts had a clothespin drop arranged to round things out. All of the participants entered over the Units’ bridge and they all (young and old) received a piece of candy as they left. It was quite popular.‑

In fact‑,it was so popular that I decided right away that I just could not do everything justice in the time that I had allotted for my visit. So I made plans to return Sunday for another walk. That is a decision that I do not regret. My only regret is that I did not know that a circuit riding preacher would be there on Sunday morning for an open air church service. According to the folks that I spoke with, it was a really refreshing change of pace for Sunday worship.

After the Sunday worship, the Rendezvous just kept getting better on this fine fall weekend. The bow and arrow competition was held, tomahawk and knife throwing continued, a ladies Seneca race was held, and there was more black powder action. In fact the four-inch signal cannon was so impressive that every time it was touched off so were three or four car alarms in the parking lot! The Fort Wayne Historical Society had the Chief Richardville House open and there was certainly a lot going on.

Jim Shawver helped organize the weekend and he spoke with me for awhile about the Rendezvous. The entire weekend was sponsored by the Southwest Conservation Club. The event was open to the public and was deliberately free of charge. The Rendezvous was arranged to be friendly to the family budget. For the various food products and the like, the cost was quite reasonable. A family of four could stop at the Rendezvous, take in the events, and sample some great food and drink for between ten and fifteen dollars. That is pretty good for today’s economy.

The best news relayed is that the Rendezvous is already on the calendar for next year. The 36 vendors will be back in even greater force and this Rendezvous should just be better. The Waynedale community really needs to support this event. If you did not stop by the Club, you missed quite a lot.