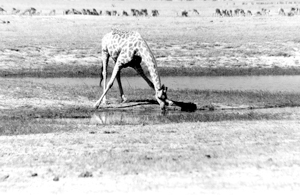 From Palmwag, we went to a small town called Kamanjab. There’s not much there but some farms and a cheetah ranch. The farmers were having too many problems with cheetahs killing their animals, and one guy decided to fence the cheetahs in on his land. He’s been doing this for a long time, and now has 4 or 5 fairly tame cheetahs that live at his house and about 20 cheetahs out on the ranch that are still wild. He and his son go out into the land twice per day and feed the wild cheetahs donkey meat from the back of two pickup trucks. While we were staying there, we were able to go to the house to see and pet the tame cheetahs. I got surprised by one of them that came up from beside me where I couldn’t see it and started licking my leg. It was a little nerve wracking to have an animal that’s not completely tame have its mouth so close to me! Then, we rode standing in the back of one of the pickup trucks when they went into the fenced-in area to feed the wild cheetahs. Again, it was pretty disconcerting to be in the open and surrounded by wild predators with no barrier between us. Fortunately, they’re pretty used to the system and just snarled from about 10 feet away while they waited for the meat to be thrown out. Very cool. From Kamanjab, we went to Etosha National Park for a couple of days. Etosha is amazing, because it’s such a flat, dry area that the animals spend lots of time gathered around any water they can find. Both of the camps that we stayed at had watering holes in the camps that were lit by spotlight at night, so you could watch the animals by night and day. I spent hours watching them, and saw tons of animals, especially big herds of zebras, lots of giraffes, several jackals, and tons of different types of antelopes (oryx, springboks, etc.). I also saw 5 black rhinos, which was cool since they’re so rare. And on one of our game drives, I saw a pride of lions that had killed a young giraffe. By the time we saw them, only the male lion was still eating. There were 2 adult females and 6 cubs (not super young, but still fairly small) there as well. The females pretty much stayed in the shade, but the cubs had some fun wrestling with each other. We stopped by the area briefly the next day, and could see that they’d pretty much hollowed out the giraffe. Wow. From Etosha, we drove to a small town called Tsumeb, and that’s where I was dropped off to continue traveling on my own. I would love to have stayed with the group, but they were going to some areas where I’d already been in Botswana, and I wanted to keep moving on. I spent the night and the next day in Tsumeb, and then caught an overnight bus that left Tsumeb at 11:30pm and arrived at Kasane, Botswana around 11:30am the next day. The next series of transportation was pretty interesting. Since the bus was going to Victoria Falls, Zimbabwe, and I wanted to go to Zambia, I had to be dropped off at an intersection near the Zambian border and get to a ferry. Luckily, there were 2 other people doing the same thing, so we joined forces. We started walking along towards the ferry with our bags, and were able to flag down a minibus that took us the rest of the way (a mile or two) for $1 for all 3 of us. We went through the Botswana immigration for departure, then walked to the ferry to cross to Zambia. The ferry was pretty dodgy, and a guy told me that they’d had one overturn in the last few weeks and kill several people. Nice. But, we made it across without any problems. During the trip, I talked with a couple of people who were driving for a tour, and arranged for them to give us a ride from the border to Livingstone (about an hour-long trip). So, in the end, everything worked out and we arrived at our hostel in Livingstone that afternoon. I spent the night in Livingstone, and then took a 6-hour bus trip the next day to Lusaka, Zambia. I was planning to stay there for a couple of days, and then take a 36-hour train ride to Dar es Salaam, Tanzania. However, I learned from some other travelers in Lusaka that there was a bus that did the trip the next day. I also met yet another couple doing that trip, so I joined them and booked it. So, instead of having time to relax in Lusaka, I ran around doing errands and then got on another bus at 5:00pm the day after I’d arrived. The bus trip to Dar es Salaam ended up taking 30 hours, and we only had very short 10-15 minute stops, apart from the border crossing into Tanzania. Believe me, after so many hours on the bus the previous couple of days, that trip seemed particularly long! In good news, there was a decent toilet on the bus. In bad news, it got worse and worse as the trip went on. I was so glad when we finally arrived in Dar es Salaam around 11:30pm on the 22nd.

I was originally planning to spend a few days doing errands in Dar es Salaam, but I woke up on the 23rd and decided to head straight to Zanzibar (an island off the coast of Tanzania) for some relaxation! The couple from the bus decided to do the same, so we took the ferry together and booked rooms at a place in an area called Stone Town.

Zanzibar is so beautiful! It’s a tropical island setting, with a very interesting history and a blend of Muslim, Persian, and Indian cultures. The architecture in Stone Town is amazing, and there are lots of small, winding alleys that cars can’t fit through. Zanzibar is also known for growing spices, and I went on a Spice Tour yesterday. We visited a couple of spice farms, and were able to see and taste lots of spices and fruits. Today, I’m going to spend more time exploring Stone Town. I’ll probably head to the eastern side of the island at some point in the next few days to stay in a bungalow spend some quality time on the beach. Can’t wait!

I think that’s about it, and this saga is long enough! I hope you’re all doing well. Please keep sending notes – it’s so great to hear what’s going on with all of you.