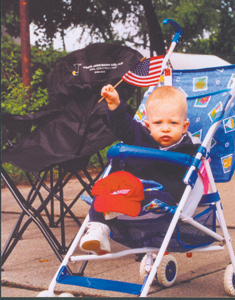 I know that it loses some of its impact when you say that this Memorial Day Parade was better than ever – but it was.

I have been either marching in or watching this American celebration since the 1950s and again this year Waynedale was exceptionally terrific. With spectators lining Old Trail Road from Church Street to the Prairie Grove Cemetery there was also more participation in the parade itself. One of my wishes would be that every individual that is currently serving our country in uniform could catch a whiff of the patriotic essence that floated perceptively through the air. Many salutes to the many American flags that passed and lots of folks waving their own smaller flags does certainly attest to that patriotism.

I like to think that we learn from history and, regardless of personal views, we do not blame the warrior for the war. Of course we cannot begin to honor the individuals that have already paid the ultimate price for our freedoms through the course of many wars and conflicts that allow us to retain our liberties in the greatest country in the world. Many gravestones attest to that sacrifice. Freedom does not come freely, there is a heavy price that has been and continues to be paid.

The Boy Scouts of America hold some of the highest values concerning God and Country of any youth group that exists today. The B.S.A. has already gone to the highest courts in the land to obtain legal vindication for our right to hold those values. And just as we hope that the smell of the Lion’s Club BBQ chicken on the grill at the bank parking lot will be with us as long as we march, we promise that those values will march with us.

We thank The Waynedaler and the Southwest Conservation Club for their successful efforts to make this a tremendous day of celebration above and beyond the parade and the heartfelt ceremonies at Prairie Grove Cemetery.

The weather was beautiful and the crowd and the parade were just as terrific. With “Waynedale Daze” at the Southwest Conservation Club and BBQ chicken at the corner there was plenty to keep a family busy for the day. I am sure that all of our military would agree that we are a Nation blessed by God with freedoms and liberties that are well worth defending.

Thank you Waynedale. And please find a Veteran to thank also.