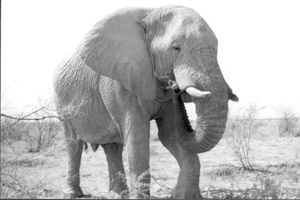 Next, we headed to Swakopmund, one of the larger cities in Namibia (though it’s still quite small). We used Swakopmund as our place to sleep in beds for a few nights – quite a luxury, since we’d been getting very little sleep in our campsites due to strange weather (very cold, very hot, very windy and blowing sand into the tents, etc.), very hard ground, and very noisy visits by wild animals (usually different types of antelopes or jackals). I also did my ‘city’ errands, especially laundry. That turned out to be quite a fun errand. I was the only non-local person in the laundromat, and got quite a lot of attention. 🙂 I also decided to get my hair braided in Swakopmund. It took about 2 hours for a woman to braid all of my hair into about 60 braids.

It was a little strange to get used to at first (especially with the bright white skin of my scalp showing between the rows of braids), but so, so easy to take care of! And I ended up getting lots of compliments and attention for it, which was fun.

From Swakopmund, we drove up the Skeleton Coast and then east again to a very, very small town called Palmwag. The Skeleton Coast wasn’t as interesting as we’d hoped, though it was kind of cool to see a flat white desert right next to the coast. The coast is also known for lots of shipwrecks, hence the name. We only saw the remains of one, and there wasn’t much to see. I think some of the shipwrecks further north on the coast are more interesting.

We camped in Palmwag for one night, and I had another elephant encounter. In the evening of the day we arrived, we had 2 bull elephants in the camp. One of them surprised us by charging a few people just next to the bathrooms and then walking by our camp while I hid behind bushes. The next day, the couple and I went for a walk and I saw the elephants from a lookout point. We decided to go within a safe distance and watch them. The couple hadn’t been around any elephants yet, so I was considered the expert on what to do. Nice. Anyway, we climbed a short rocky area close to them and had a great time hanging out and watching them and listening to them eat for about an hour. We’d gotten pretty close to them (about 20 meters), but had our escape route planned if necessary. They didn’t pay any attention to us for a long time, but all of a sudden, both elephants swung around to look in our direction, froze, and put their ears out to listen. It was clear that they’d just noticed us. I quickly said, “Don’t move!” to the others (since elephants have really poor vision), and we froze on the rocks. We had that stand-off for about 20-30 seconds, and then the larger bull elephant raised his trunk in the air to smell. I quickly paid attention and realized that the wind had shifted and we were upwind of the elephants. Not good. I immediately told the others, “Okay, we need to back away slowly and get out of here, but don’t run.” (since that would have made the elephant charge). Well, sure enough, just as we grabbed our stuff and got off the rocks and backed down the trail, the larger elephant came quickly walking over to where we’d just been. It wasn’t really a charge, but would have been really bad if we’d still been there! It was pretty exciting, and I was thankful for all that Russell (the safari guide I’d had in Botswana) had taught us about how to act around elephants. They’re still my favorite animal!