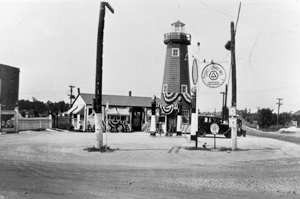 The Tower and the Church

In the late 1920’s a first lone gasoline pump occupied the northwest corner of Old Trail and Lower Huntington Roads, where East of Chicago Pizza now resides. The sign at the corner often said: ‘Out of Gas.’ This single pump was replaced by three new pumps owned by the Tower City Service Station. They supplied Regular and Ethyl gasoline as well as Kerosene. Kerosene was a needed fuel for both heating and cooking and was heavily used during the depression years. The pumps were hand-operated by pumping the lever side to side, which filled the metered glass globe at the top of the pump. The gas-boy (station attendant) would put the nozzle in the car and release the desired amount of gas. After the gas was gravity fed into the gas tank, the customer would always demand that the gas-boy drain the hose. This was willingly done, as well as cleaning the windshield, checking the oil, checking the air in the tires and the water level in the radiator. There was an open pit next to the building, which allowed the attendant to get under the car for grease and oil changes. There were no hydraulic lifts and no self-serve gas stations.

Homer, Glen and Grace Crowl were the successful owners of the Tower Service Station. Over the years the ownership transferred to Ed Bell, Bob and Vic McCoy, Marion and Florence Comer.

This may sound like all work and no play for the teenage gas-boys, but that is far from the truth. This corner soon became a fun spot for the entertainment of the youth of Waynedale.

Just north of the Tower Station, was a long white building which was erected by Reverend and Mrs. Edward Irvine and their congregation. The building, the Bethel Temple, seated about 100 people and it is said that what they lacked in numbers they made up for in enthusiasm. Prior to leading this congregation, Reverend Irvine was the lay pastor at the Waynedale Methodist Episcopal Church, which later merged to make the Waynedale United Methodist Church.

The next door north, now Sparkle Cleaners, was Gus Schlaudraff, the cabinetmaker, who was always available to help the local contractors. While Gus made beautiful cabinets, his wife Mary Alice was busy beautifying women’s hair.

Growing up in the fifties, you had two choices of gasoline, either Regular or Ethel. It was understood that Ethel was better than Regular and if you wanted a little more power you would put Ethyl in your tank.

When crude oil is pumped out of the ground, the refineries ‘crack’ the crude into different products. This is done by heating the crude to a high temperature and vaporizing it.
When you drive past a refinery you see many types of steel towers with all sorts of pipes running out of the tops of them. This is needed as part of the refining process. The lightest factions of the crude oil vapor are drawn off as gasoline, and the heavier factions are drawn off as kerosene, diesel fuel, three grades of fuel oil and the very heaviest factions are used in asphalt.

The cheaper grades of the gasoline refining process were sold as regular gas.

The oil companies took the lead out, which means they just quit adding it, and nothing seems to have happened.

If they quit adding tetraethyl lead then wouldn’t all the gasoline just be regular gasoline? The answer to that is, that what they now call premium gas is a lighter faction of the crude oil which produces a higher grade of gasoline, which is more expensive to refine than regular gas, which is probably why they fought doing the conversion in the first place.

So the next time you pull up to a gas pump, remember, no more Ethyl, just clean burning no-lead. For information on gas prices go to www.in.gov/attorneygeneral.