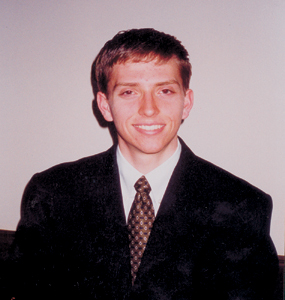 Editors Note: The Waynedale News previously did a story on Stephen Felicichia when he received his Eagle Scout Award. At that time we mentioned that Stephen was attempting to get into West Point. Following is a follow-up to that story, in his own words.

My interest in West Point began to develop right at the beginning of my high school career. At that time I began thinking (somewhat abstractly) on what I would like to do with my life after my eventual graduation. At the time with my senior year still an unimaginable four years away I considered many things, but one of the most prominent was a career in the military. My desire to serve my country had been kindled by my family and the ideals instilled in my youth, and my desire to lead, had been fostered in my participation with my Boy Scout troop. What truly clinched my desire to attend the academy were the events of September 11th, 2001. To me it was a call to arms, one I did not fully discern until late in my junior year. That’s when it occurred to me that if I was going to serve my nation, I wished to be one who would be placed right on the line of conflict. I wanted to go to West Point.

When I had finally made up my mind I began to determine the application process. Most applicants began the process at the beginning of their junior year and I had started the process right near the end of mine. The situation was made even more difficult in that the West Point application is more like three college applications. A person must gather letters of recommendations from their teachers, coaches, scoutmasters, and other adults who know the individual. These are also sent in with teacher evaluation forms in which your mentors describe your abilities in science, math, English and other curriculum. Also, the military academy needs SAT, or ACT scores, needless to say, the higher the better.

Recommendation letters and grades are only the first part of it. All applicants must take a physical fitness test administered by a coach or other knowing official in which they must perform at least to standards set by the military academy. The better a person does on these tests, the better chance there is of being accepted for the physically demanding training and life at West Point. Finally, every candidate who wishes to enter the academy must gain a nomination, either from a congressman, senator, or the vice president of the United States. Without this nomination, the academy will not select a candidate.

Even if all these tasks are completed and a nomination is given, there is still no guarantee that you will be appointed to the academy. West Point admissions still makes the final decision on who is to be admitted.

Needless to say, when I realized the dauntless amount of work I would need to complete before the deadline (which was fast approaching) I despaired. However my mother reinforced my dedication. My mom basically said that yes, it would be difficult to complete, and yes, there would still be no guarantee of success, even if I did manage to complete it, but, if this was something I truly wanted to do, I should not let the amount of work stand in the way. With my confidence reinforced, I began one of the hardest processes of my life.

I proceeded to hand out all the appropriate paperwork to my school’s faculty, and began to ask my teachers, coaches and scoutmasters for letters of recommendation. I began studying for my SAT and ACT exams in an attempt to increase my scores and took each several times. I began a scheduled workout routine in order to perform as well as possible on my physical exam. I had several physical examinations to confirm to the military that I was healthy, and even had my tonsils removed to do away with my chronic tonsillitis that had plagued me through my childhood and would have disqualified me medically.

To gain congressional approval I had to send in a wealth of personal information and a letter explaining why I should be appointed to the academy. I was lucky enough to have the chance to obtain two interviews, one with Senator Bayh’s selection committee, and one with Congressman Souder’s selection committee. From Congressman Souder I was able to obtain a competitive nomination. This meant that I was now “in the running” so to speak for an appointment to West Point. The competitive nomination meant that four other candidates and I were each given a nomination and West Point would make the selection. The months ticked by and I began to suspect that I was not likely to gain an appointment. In preparation for this I began to apply for ROTC scholarships that would allow me to train to become a U.S. Army officer while I attended college. However, on the morning of March 3rd, I was awakened by my mother and father who elatedly informed me that I had been offered an appointment to the United States Military Academy. The fact that I had just been disturbed from my nocturnal slumber slightly hampered my ability to express my elation that all of the hard work had paid off. However, this was tempered with the knowledge that now the truly hard work was about to begin. The irony is, I did all this hard work, just so I could do even more hard work.