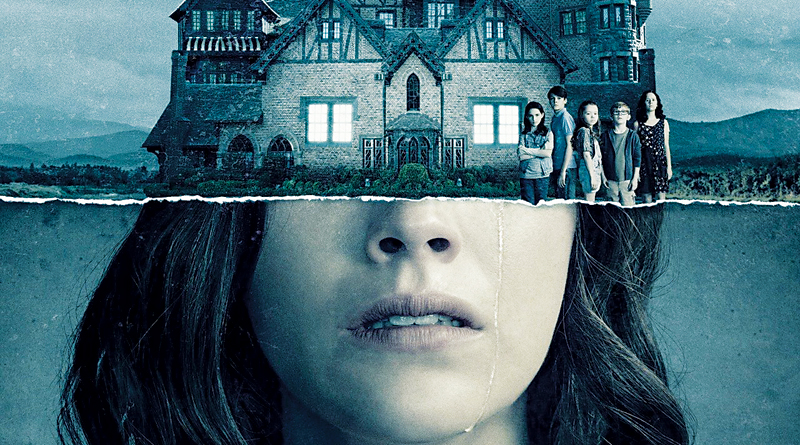 “No live organism can continue for long to exist sanely under conditions of absolute reality; even larks and katydids are supposed, by some, to dream. Hill House, not sane, stood by itself against its hills, holding darkness within…” Netflix’s The Haunting of Hill House begins with the opening lines of the Shirley Jackson’s novel of the same name, but from there it diverges dramatically, creating a series that is different in plot, but similar in tone, theme, and scariness.

The series takes place during two time periods: two months in the early 90s when the Crain family lived in Hill House while they worked on remodeling it for resale, and the present, which explores the emotional repercussions of Hill House for the family. The Crain family–Olivia (Carla Gugino), Hugh (Timothy Hutton/Henry Thomas), Steven (Michiel Huisman/Paxton Singleton), Shirley (Elizabeth Reaser/Lulu Wilson), Theo (Katie Siegel/Mckenna Grace), Nell (Victoria Pedretti/VIolet McGraw), and Luke (Oliver Jackson-Cohen/Julian Hilliard), as well as the house’s caretakers Mr. (Robert Longstreet) and Mrs. Dudley (Annabeth Gish), are haunted by the house, even after they leave the premises. Setting limits with the house seems to be the only way to get through unscathed, but not everyone can do that, and when the story picks up years after the family’s traumatizing final days in the home, Nell has started seeing the Bent Neck Lady, the ghost who terrorized her as a child, again. The return of the ghosts reignites suppressed fears and family fights about whether mental illness or paranormal activity leads to the destructive streak in the Crain family. What unfolds is a family drama with plenty of scares, but also reflective, emotional elements that raise questions about the connections between members of a family as well as between people and the places they call home.

Shirley Jackson is one of my favorite authors and I thoroughly recommend reading her novel, The Haunting of Hill House. The series pays homage to the novel by naming its main characters after main characters in her book and Shirley herself. It also borrows some exact language from the novel, such as the scene featuring Nell’s cup of stars, the scene in which a ghost squeezes Theo’s hand while she tries to sleep, and the monologue about a rainstorm of tiny stones. Hill House itself is very similar between both the series and the novel. While the plots are completely different, the focus in the series on family, grief, anxiety, and trauma resonates with Jackson’s body of work. This drama elevates the scary parts and makes the plot compelling.

The scary parts really are scary, though. The Haunting of Hill House is atmospheric and filled with a pervasive sense of dread. There are some jump scares, but in other moments a ghost might just lurk in the background without the characters realising it. The combination of an unsettling style and classic haunted house gags makes the show fun to watch but also artfully made. As scary as I found the series in the moment, it did not keep me up at night.

I binge watched The Haunting of Hill House, hooked by the ghost stories and the outstanding acting of the cast, as well as the moving character development. Once I was done with the finale, the only episode that seemed so-so to me, I wanted to go back and rewatch the series. As I started to watch the episodes again, at a more measured pace, I was struck by how meticulously the two timelines of the story are woven together. There are callbacks and foreshadowing throughout that are sometimes subtle enough that they reflect on the intricacies of memory. Other times, the nonlinear plot allows for clever winks at the audience. The overall effect is to keep the audience in the dark about what really happened on those last days in Hill House, just as the Craine children are.

Because I like Shirley Jackson’s writing so much, I was very skeptical when I first saw the promotions for the Netflix series. I ended up getting totally swept away by this scary, moving portrait of grief, family dysfunction, and the power of place on the psyche.

The Haunting of Hill House was created by Mike Flanagan, inspired by the novel by Shirley Jackson. Its ten episodes stream on Netflix and are rated TV-MA.