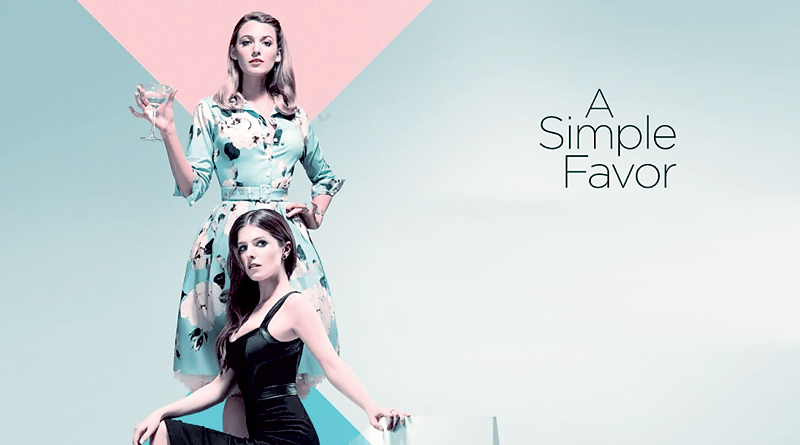 As a bookworm, it is truly a rare occasion for me to think a movie is better than the book, but the recent film A Simple Favor managed to best the novel it’s based on.

In A Simple Favor, glamourous working mom Emily Nelson (Blake Livey) strikes up an unlikely friendship with widowed mom Stephanie Smothers (Anna Kendrick).The friendship means a lot to Stephanie, so when Emily disappears after asking Stephanie to pick up her son, Nicky (Ian Ho), from school, Stephanie does everything she can to discover what happened to her, even after she starts up an affair with Emily’s husband, Sean (Henry Golding). What follows is a twisted tale of betrayal, family, and maybe a murder or two.

A Simple Favor is based on the novel by Darcey Bell, but the film takes a lot of creative license, changing the ending and therefore some of the plot points along the way. It also changes the overall tone of the story, so that many parts play for laughs where the book kept a relatively serious and thrilling approach. I did not particularly enjoy the narrative voice of the novel, so these changes may have contributed to me liking the movie better than the book. Then there’s the chemistry between Blake Lively and Anna Kendrick. Kendrick is naturally very funny and for once I felt like Lively was delivering a performance that did not rest solely on her charm and beauty. As a pair, they exaggerate the differences between the two women and give the story more punch and humor than it might otherwise have.

A Simple Favor is still kind of a mess. It is fun in the way that trashy thrillers are, but a lot of my favorite parts were technical, like set and costume design, rather than the plot or the characters. It is a fairly convoluted and cliched story told with good acting and technique. 3/5 stars.

A Simple Favor was directed by Paul Feig and written by Jessica Sharzer. It is rated R for sexual content and language throughout, some graphic nude images, drug use and violence

Also in theaters is Searching, in which David Kim (John Cho) is desperately trying to find his daughter, Margot (Michelle La). With the help of Detective Vick (Debra Messing), he sorts through her digital life, retracing her steps, and questioning how well he really knows his daughter. The film takes place entirely on a computer screen, cleverly using video streaming and chatting apps to show the action while additional clues unfold through text and audio. The acting in the film is pretty wooden, but the mystery is riveting and the use of the digital framework is cleverly done and interesting in its own right. I’m not sure the multiple viewings the more recent ads suggest are necessary, but this film would be a great choice for people who like technology or true crime. 3.5/5 stars.

Searching was written and directed by Aneesh Chaganty with Sev Ohanian. It is rated PG-13 for thematic content, some drug and sexual references, and for language

Streaming on Netflix, Sierra Burgess Is a Loser riffs on the classic Cyrano de Bergerac as mean girl Veronica (Kristine Froseth) gives band nerd Sierra Burgess’s (Shannon Purser) phone number to Jamey (Noah Cinteneo) when he asks her for hers. When Jamey starts texting Sierra, thinking she is Veronica, the two start up a budding romance. When Sierra discovers that he thinks he is texting someone else, she is too afraid to reveal her real identity, so she trades Veronica free tutoring in return for her help keeping Jamey in the dark. As the plot unfolds, the two girls develop a friendship as Sierra and Jamey fall more in love. But can the relationships survive the truth coming out?

Sierra Burgess Is a Loser is a sweet, funny teen comedy in the tradition of films like Can’t Buy Me Love and Some Kind of Wonderful. You might even recognize Sierra’s parents as actors who starred in some very famous teen movies. It balances the romance with a thoughtful plot about a young woman trying to discover some confidence. As my wise little sister pointed out, the story is really about the friendship between Sierra and Veronica, and the film could have been better about not shifting the focus too hard in the end toward Jamey. The blossoming bond between the girls is both more interesting and satisfying than the romance plot and it does a decent job with picking apart the categories that teen movies like to lean on. There is also the funny presence of Sierra’s best friend, Dan (RJ Cyler) that brings a sharper wit to the mix, balancing out all the sweetness. Overall it is a great film to watch during a weekend afternoon on the couch.

Sierra Burgess Is a Loser was directed by Ian Samuels and written by Lindsey Beer. It is rated PG-13 for sexual references, language, teen partying and thematic material.