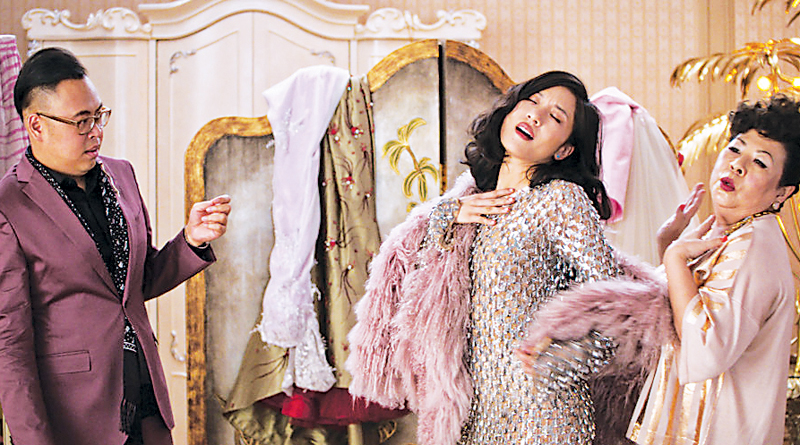 Crazy Rich Asians is the first Hollywood film in 25 years to feature a predominantly Asian cast and it delivers a fun, endearing romantic comedy. The Spy Who Dumped Me puts female friendship at the center of a hilarious movie that can’t decide what genre it wants to be.

In Crazy Rich Asians, Rachel (Constance Wu) is a Chinese-American economics professor headed for her first trip to Asia as her boyfriend, Nick’s (Henry Golding), date to his friend’s wedding. The trip will also serve as Nick’s opportunity to introduce Rachel to his family. The only hitch is that Nick is the heir to his family’s multi-billion dollar real estate empire and his mother, Eleanor Young (Michelle Yeoh) is frustrated that he has not yet moved back to Singapore to take over the business and disapproves of his American girlfriend. Then, there’s the fact that Nick neglected to tell Rachel that he’s basically “the Prince William of Asia” and she is suddenly thrust into a world of glamor, backstabbing, and manipulation. Fortunately, Nick’s cousin Astrid (Gemma Chan) and Rachel’s college roommate, Peik Lin (Awkwafina) are there to help her along.

Crazy Rich Asians is one of the best romantic comedies I have seen in a long, long time. The pacing clips along as the story balances the family drama with comedy and romance. The performances are funny and charming and the chemistry between cast members is wonderful. Especially strong performances are delivered by Constance Wu, Michelle Yeoh, and Awkwafina. As Rachel, Wu brings a really balanced approach to the character. Rachel is obviously vulnerable because of the unfamiliar and sometimes hostile situation she is thrust into, but she is also smart, tough, and accomplished, and Wu portrays that contrast without the moments in which Rachel shows more gumption looking like a switch is flipped in her head. The ebb and flow to the character is organic and nuanced. Yeoh’s performance as Eleanor had me continually thinking that she was going to soften, but her toughness persists. This trick is accomplished by Yeoh’s subtlety and emotional depth. There are several outlets for slapstick and other gags in the film, but Awkwafina’s Peik Lin is the most consistently delightful. She makes a funny and endearing sidekick.

Overall, Crazy Rich Asians is full of gorgeous sets, fancy clothing, and tons of eye candy. It is the solid family drama and the wonderful performances, however, that will keep you hooked. 4.5/5 stars.

Crazy Rich Asians was written by Peter Chiarelli and Adele Lim based on the novel by Kevin Kwan. It was directed by Jon M. Chu, runs 2 hours, and is rated PG-13.

The Spy Who Dumped Me is one part buddy comedy, one part action thriller, and one part romantic comedy. It opens on Audrey (Mila Kunis) and her BFF Morgan (Kate McKinnon) ready to burn the belongings of Audrey’s ex-boyfriend, Drew (Justin Theroux), after he dumped her suddenly via a text message. Before they can get far in their barbeque, however, Drew calls telling Audrey that he will come get his things the next day. Then, Audrey is pulled into a sketchy van by intelligence operatives, Sebastian (Sam Heughan) and Duffer (Hasan Minhaj). When Drew does arrive, he is being pursued by assassins. What she thought was just a bad breakup turns out to be an international terrorist plot that inadvertently pulls Audrey into an underworld of spies, trained killers, and the biggest adventure of her and Morgan’s lives.

Every time I see a Kate McKinnon movie, I leave feeling exhilarated and happy to be alive. Her performances alone can make a movie worth watching. In The Spy Who Dumped Me her chemistry with Mila Kunis helps sell the depth of their friendship and grounds the movie in protagonists you want to win, even if them winning means a lot of violence. Therein lies the biggest problem with the movie. On one hand, the friendship is sweet and affirming and really funny. On the other hand, the movie is often a pretty violent espionage thriller. The screenplay fails to strike a balance between these two elements, and then when the romantic comedy element is added in too, it is all too much. It plugs along twist after twist and eventually it starts to feel like the writers were making the story up as the movie played. It is a mess.

But it’s a really fun mess. Even if I found the screenplay distractingly meandering, I really enjoyed the film. 3/5 stars.

The Spy Who Dumped Me was directed by Susanna Fogel, who wrote the screenplay with David Iserson. It runs 1 hour and 57 minutes and is rated R.