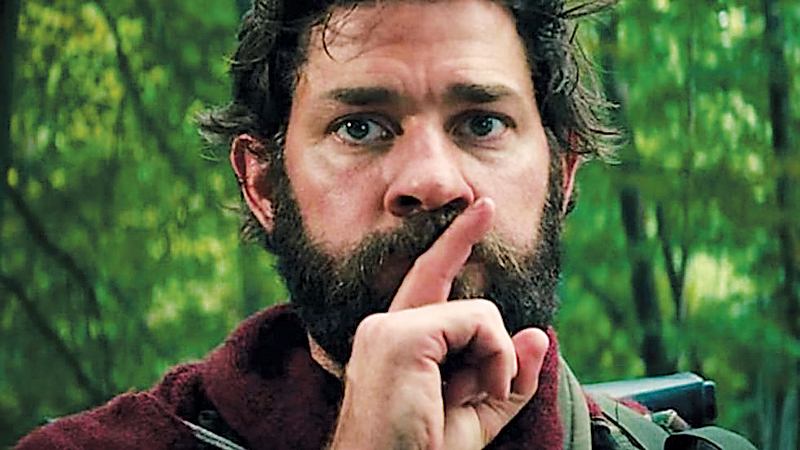 It’s a special treat when a scary movie is also a beautiful film. A Quiet Place, a new monster movie from John Krasinski, infuses 90 minutes of uncomfortable suspense with a touching story of familial love. It also features impeccable sound design and outstanding performances from Krasiniski, his wife, Emily Blunt, and young actors Millicent Simmons and Noah Jupe.

In A Quiet Place, Earth has been invaded by mysterious creatures that are intensely drawn to sound, killing anyone who makes even a little noise. At an undisclosed time after this invasion, the audience joins the Abbott family (Krasinski, Blunt, Simmons, Jupe and Cade Woodward), who has managed to adapt to the silence and survive on their family farm. The family is perhaps better equipped than most, because their daughter (Simmonds) is deaf, and they are all therefore able to speak American Sign Language. As the children struggle to find their roles in the family, particularly after a family tragedy, the adults struggle to protect them and to prepare for a baby on the way—basically a time bomb in an environment where any noise means certain death.

The plot of A Quiet Place is fairly simple, and straightforward. The monsters are not even that impressive. What makes the film so compelling is the relationships that ground the story. The performances delivered by Krasiniski and Blunt are so tender that I felt invested in their marriage and the love they feel for their children. Then, as the situation really goes sour for the characters, Blunt’s terror and pain are agonizingly real. The relationships between the children are also dramatic and tender, but they are interesting because of how the kids want different roles in the family than what they are offered. There is something sweet, frustrating, and authentic about how the daughter seeks a more active role while the son wants to stay home and help the mother, but the parents’ worry keeps them from seeing their children’s needs clearly. The family’s love, however, outweighs this angst.

The sound design amps up the tension to palpable levels. I saw the movie at a theater that has a full-service restaurant, and as I walked to my car, I listened to two guys talk about how stressed they were during the movie. One said, “When I was having my milkshake, I even made sure I eased into it, so I wouldn’t slurp.” The other said, “The waitress put that plate down and it was so loud I wanted to say, ‘What’s the matter with you!?’” The quiet is so key to the suspense in the film that I did not even want to breathe, lest I make a noise. What sounds are included are rich and layered and the score is used judiciously. The cinematography is beautiful as well, but the sound design is basically a work of art.

A Quiet Place was directed by John Krasinski who wrote with Bryan Woods and Scott Beck. It runs 90 minutes and is rated PG-13.

Streaming on Netflix, Hush takes a similar approach to horror as A Quiet Place but from the opposite angle. In Hush, Maddie (Kate Siegel) is a deaf woman living on her own in a rural neighborhood when a masked killer (John Gallagher Jr.) picks her as his next target. The film is extra suspenseful because of how it works with Maddie’s many adaptations, such as light-based fire alarms. This interesting spin on the slasher genre is carried by an outstanding performance by Siegel, who depicts her character’s terror and strength with striking depth. Aside from Maddie’s deafness, Hush does not deliver much of note for the horror genre, but it is a compelling movie and worth a watch.

Hush was written and directed by Mike Flanagan. It runs 81 minutes and is rated R.

If you’re looking for a book instead, you might be interested in Bird Box by Josh Mallerman. It is a riveting page-turner in which a group of people try to survive in a world that has been invaded by a creature that, once they lay eyes on it, causes people to become suicidally self-destructive. If you enjoy A Quiet Place, then Bird Box would be a great book pick. It does similar work with the deprivation of a sense and has a similarly claustrophobic and tense tone. I read it in one sitting, because I could not put it down. I had to know what happened next. The characters are relatable and the plot is riveting. Additionally, Mallerman’s writing is rich and works well with the restraints he puts on the story so that the suspense continues to grow as the story continues.