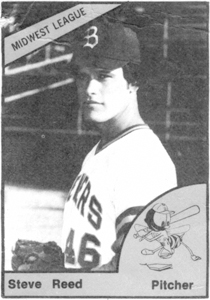 Steve Reed, long time Waynedale resident, was inducted April 30 at the yearly hall of fame banquet held at the WWII Museum located at Auburn, Indiana. Steve is possibly the only first round drafted player to be born in Fort Wayne. He started his baseball career at the age of eight in the Wildcat League. The next year he started pitching with May Sand & Stone in the Elmhurst Little League.

One year while pitching in the Mickey Mantel League, he struck out twenty-two batters in a seven-inning game. At fifteen he moved to the Scott League and the team won the city championship. At seventeen he played for the St. Joe Athletic Club, which won the state tournament. That team advanced to the Midwest Regional at Springfield. Steve pitched two one hitters and they advanced to the National Finals in Farmington, New Mexico. They were eliminated in the second round by a team from California who eventually produced five major leaguers.

In 1972, he played for Wayne High School the first year baseball was played in public schools. Wayne won 3 Sectionals and Steve was selected to the first All City Team.

In 1974, Steve was selected by the Cincinatti Reds in the first round of the June draft. Some first round players selected in that draft were: Loni Smith, Dale Murphy, Gary Templeton, Lance Parrish, Willie Wilson, and Rick Sutcliffe.

He signed with Cincinnati and played four years at Billings, Tampa and Shelby. He hurt his arm and was released in 1977.

In 1978, he signed a minor league contract with the Milwaukee Brewers as a closer. He played for Milwaukee (A), Holyoke AA, and Vancouver (AAA). He never made the majors primarily because Milwaukee had a closer named Rollie Fingers at the time.

Steve Reed, who is looking very young for his age, enjoyed 7 years in professional baseball. This long time Waynedale resident in now a salesman for Robert Dietrick Co. Inc., with offices based in Fishers, Newburg and Columbia City, Indiana.

His picture is now displayed at the North East Indiana Baseball Museum and Hall of Fame, located in the Kruse WWII Museum at Auburn, Indiana.