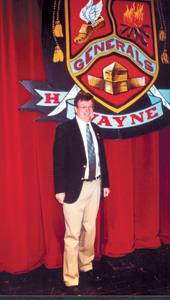 Last Tuesday morning, 01-08-02, I drove over to Wayne High School to attend Mark Souder’s Town Meeting. The meeting started at 9:30am and the press release said Mark would be discussing the war on terrorism, homeland security, and other issues of importance. As usual, I was running late. I walked through the main doors and saw that there was an armed security person present. Oh no, I thought, I didn’t bring my ID with me. I walked through the glass doors and asked the security guy where Mark Souder was. He pointed me in the general direction, without bothering to ask me for my ID. I made my way to the auditorium and sat in one of the theater seats.

Mark was busy explaining some of the problems with creating a nation free of terrorism. He had a map on stage and was pointing out the vast borders of our country. He then went on to explain that as our 4th district representative, he was busy studying the most efficient ways to keep our nation secure. Mark explained that while our government has made many changes in the way we handle security at our airports, there would always be a risk of terrorism. He as well as other leaders of our country, are forced to make trade-offs as to where to spend our tax dollars to do the most good.

Someone asked Mark, “Why not just use the military to secure the airports. We are paying them anyway, why not just let them help out, as they already have security clearances”.

Mark explained that the U.S. Constitution states that the military cannot be used to solve domestic problems and that that amendment was important so as to prohibit military coos in this country.

Another student changed the subject, and asked why Mark wasn’t stopping at IPFW for one of his town meetings?

This question drew the most emotion from our 4th district representative. He explained that he was still upset with the IPFW campus for allowing Corpus Christi to be shown. He was upset because the theater department’s position was that the play was a first amendment, free speech issue, and Mark felt that it was a Christian issue. Mark felt strongly that had the play been critical of other ethnic or religious groups that the play would not have been allowed.

The next question was about energy and our dependence on foreign oil. Mark explained that one of the reasons that the price of gas has gone down is that we have transferred some of our oil purchasing from Saudi Arabia to other sources. We are now buying from Russia and Canada, and trying to develop our Alaskan resources. Our government has also worked to find alternate sources of energy. The use of ethanol, wind energy and solar energy have not paid great dividends, but the future of hydrogen fuel looks promising.

The meeting was over and Mark was on his way to another meeting in another town. I was just happy that security had looked me over and made an arbitrary decision that I was not a terrorist. They let me enter without hassle and without undue interference in my schedule. It was an indication to me that we are getting back to normal. Mark, as well as our other leaders take a chance every time they mingle with the public, but that risk has always been there and it is encouraging to see that our leaders are back in the business of running our country.