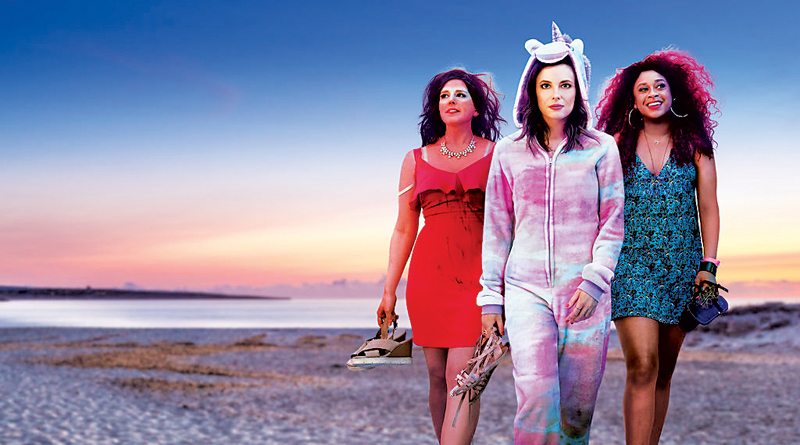 Summer is a great time for travel adventure comedies, and Netflix has released some new originals to fit the bill.

Ibiza is a new movie about three friends on a romp through Spain that hides a sweet romance at the heart of a sometimes raunchy travel comedy. In Ibiza, Harper (Gillian Jacobs) has spent four years toiling at a PR firm when her terrible boss, Sarah (Michaela Watkins), finally sends her on a cool business trip. She’s bound for Spain to land a big sangria company as a new client. Harper’s friends Leah (Phoebe Robinson) and Nikki (Vanessa Bayer) decide to tag along. Once they arrive in Spain, Nikki strikes up a quick romance with Diego (Felix Gomez), who works for the company Harper is wooing and invites them to a club. At the club, Harper and the DJ, Leo West (Richard Madden), fall hard for each other, but are quickly separated at the club. In order to see him again, Harper and her friends end up on a madcap trip to Ibiza and back to Barcelona, as Harper tries to get the guy and not lose her job.

At first, Ibiza seems like it is going to be just another Girls’ Trip or Rough Night. What sets this movie apart is the chemistry between Harper and Leo. From their meetcute, the pair’s attraction to each other shakes up the larger than life elements of the movie and gives the audience something to invest in and something that, showy set dressings aside, seems lifelike. In portraying the romance, Jacobs and Madden really work together. Their characters’ awkwardness and the sweetness that lies underneath it work to the film’s advantage. Similarly, the chemistry between the two sidekick characters, portrayed by Vanessa Bauer and Phoebe Robinson makes material that is not particularly funny actually land. The movie is silly and often inappropriate, but the characters are warm and funny and surprisingly easy to root for.

Ibiza was written by Lauryn Kahn and directed by Alex Richanbach. It runs 1 hour 34 minutes and is rated TV-MA.

I thought Deidra & Laney Rob a Train would be a buddy comedy movie, but the trains that Deirdra and Laney rob cut through their backyard, so there is not much actual travel involved. Instead, the movie is a family dramedy about two sisters trying to hold their family together while their mother is in jail. In the story, Marigold Tanner (Danielle Nicolet) is a single mother, trying to support her family by working at Good Buy when she snaps under the pressure and winds up in jail on trumped-up “domestic terrorism” charges for busting a TV. Her oldest daughter, Deidra (Ashleigh Murray) is on track to go to college, possibly with a scholarship, until she has to figure out how to keep her siblings, Laney (Rachel Crow) and Jet (Lance Gray), together and out of foster care while their mom is in jail. With little help from their father, Derek (Gage Bradley), the girls turn to a foolproof plan to rob trains in order to raise the money to bail out their mother.

While Ibiza surprised me in a positive way, I thought that Deidra & Laney was going to be much funnier and more charming than it is. The movie has elements that it could have done a lot with, even without sacrificing the comedy element. 1 in 28 children in the U.S. have at least one incarcerated parent and millions more have a parent struggling to support the family. These are real issues that kids face and the film treats them with what alternates between slapstick and ABC Family cheesiness. Although Deidra and Laney are sympathetic characters, the overall tone of the film is uneven and the supporting characters are shallowly drawn. The result is a pretty forgettable story that I was tempted to turn it off. Deidra & Laney is a more family-friendly movie, but it was Ibiza that, despite its raunchier elements, had me hanging on to find out what happens in the end.

Deidra & Laney Rob a Train was written by Shelby Farrell and directed by Sydney Freeland. It runs 1 hour 32 minutes and is rated TV-14.