Ooooooooooo- ohhhhhhhhh I just have to tell you, Wayne and I went gallivanting again. I know that doesn’t sound exciting but when you go somewhere with Wayne you never know what kind of situation you will run into, be in, or the shenanigans he will pull or try to pull off and I mean that literally, my girdle for example – he ruined another one.

We drove THE CADDY (it really isn’t a Cadillac; Wayne tells people that he loves golf and it’s what he calls our car because it’s what he uses to haul his old bag around or did I tell you that already? Oh well.

When I catch on to what he is laughing about I’ll fix his little . . . well, anyway, he makes up for his nasty remarks (whether I catch on to them or not). He did bring me a large brown paper sack full of dark chocolates for Valentine’s Day with a very nice card from Walgreen’s and for that I gave him a few extra, shall we say, “Privileges?” He is so cute at times even if he doesn’t wrap presents well. At other times I’d like to strangle him with his old BVD’s.

He bought me the loveliest white thong. It only had one little red heart on the front since there wasn’t room for any more than one. I don’t like it because it left a tan line when I was under the sun lamp but I thanked him anyway, the thoughtful lecherous little dear.

Anyway, we drove down and around Markle – that’s what I refer to as the Waynedale Annex. We have eaten at the Davis Family restaurant before and from what I remember they serve some delicious pies there but as I remember I never could get a piece of apple pie with a double crust there; you know that’s a crust on top as well as one on the bottom. For some reason double crust apple pie must be a southern thing. Maybe they’ve changed their menu.

Most restaurants up north here serve up what they call Dutch apple pie – that’s a crust on the bottom and some kind of crumbly stuff on top – no crust up there. Up north here you can get double crust cherry pie and double crust peach pie and definitely a double crust blueberry pie, why not double crust apple? Must be Yankee bakers!

Well, anyway, we didn’t stop there to eat but went on over to the Dairy Queen right off the Interstate. They serve the bestest ice cream bars there. They call them Dilly Bars and I won’t tell you what Wayne said about the name.

They start with a wad of ice cream on a stick and then they dip it in chocolate, cherry, or caramel coating. They then freeze them real hard and they are just so much fun to eat and are they delicious. I just wasn’t in the mood to eat a big meal that day nor did I want pie. I just had a ‘hankering’ for a Dilly Bar.

I watched Wayne eat two of the cherry dipped bars while I ate a Carmel coated one. And I just want to know just how can Wayne get peppermint Dilly bar chocolate in his sock when we didn’t even order chocolate or peppermint? I can’t watch him close enough to figure it out, I mean, he’s done stuff like this before.

We drove around Markle and you know it’s not a bad little place; Wayne said he would like to rent a place there by the river for the summer. He loves to fish you know and I hear the river there is nice and clean and the fish would be good to eat. We’ll let you know come spring if we ever have one – I just hate this snow so much. I got a letter from a cousin over in Pennsylvania and she said that the snow was only ankle deep on her husband Clifford but he was standing on his hands at the time. 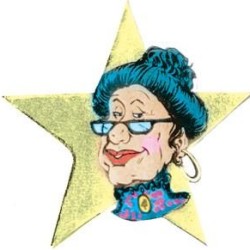 The adventures and reviews of Mrs. Waynedale are written by a mystery author in the Waynedale area. You have to love her, eccentric, truthful, and quaint as she is. She is a champion for Seniors.

The adventures and reviews of Mrs. Waynedale are written by a mystery author in the Waynedale area. You have to love her, eccentric, truthful, and quaint as she is. She is a champion for Seniors. > Read Full Biography > More Articles Written By This Writer