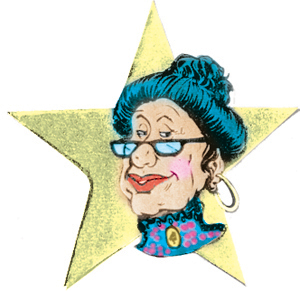 BIRTH – Mrs. ‘D’ as we call her here at The Waynedale News, says she was “borned” and raised, but doesn’t tell us where in the United States, if in deed she was born in the United States which is not unlike the story we get from our country’s present top leader. We have the feeling that she came from Canada but then with her sense of humor that couldn’t possibly be and with her Deep South, Florida/Georgia/Texas accent trying to give her away now and then.

NAME – We have heard that her mother’s maiden name was Butts and we assume that her middle name is her mother’s maiden name as was the case for how people named some of their children back in the late 1800’s, maybe a little earlier; we never know when she’s pulling our leg.
Her Christian name is Bertha we assume from what she told us earlier in one of our interviews and her middle name we know is Butts but not what her maiden name was before marrying Mr. Wayne Dale (which isn’t his real name either and that makes Mrs. Wayne Dale only a pen name, which leaves us back at square one.

HOW MANY BIRTHDAYS – Which brings us to her age and that we can only guess it to be between 80 years and infinity due to the way she talks and thinks. Sorry, but that’s the best we can do. We understand that she does wear funny underwear or bloomers as she calls them (which that name went out in the ’20’s we think) but sometimes when she says she’s feeling naughty she gets into her leopard skin pattern thongs. She says she wears those when she has “outdoor activities planned” and then she winked at us. She says she still isn’t too old to enjoy ‘fooling around” with her Tubby Hubby but does have hot flashes now and then to where they turn off the furnace in January – go figure.

DESCRIPTION – She’s about 160 pounds and I would say, give or take a few inches due to her extra high spike heels, to be about 5 foot 10 inches. We know she’s taller than her “tubby hubby” Wayne or whatever his name is. He’s a short 5-foot 4 inches we guess. They are some couple seen together and he is truly a tubby little chap with a deadpan type sense of humor and he likes golf.

WRITING BACKGROUND – We asked her about her writing and she told us she was “borned” with a silver quill in her mouth. She said, She has “. . . penned words on parchment since the day she was “borned”. I asked her about her signature opening of “Oooooooooooooooohhhhhhhhhhhh I just have to tell you . . . ” and she said that it was a personal tribute to the male 6th grade school teacher that got her interested in writing for the county newspaper The Exponent Sentinel Telegram back in Kansas or maybe it was Missouri; she wouldn’t repeat it when we asked again after misunderstanding what she said the first time. We assume that she is educated because no one could write like she does without a thorough knowledge of the language and have a glib tongue like she possesses.

EDUCATION – She said that she had a ‘sheep skin’ from every one of the schools she has ever had the privilege of attending from the very first Cradle Role certificate she got from her hometown church, to the one from Palmer Institute of Authorship in California, to the last degree she earned from a small well known college in either Indiana or some other state; she couldn’t remember and wouldn’t elaborate.

FAMILY – We know she’s been married for, as she put it, “Umpteen years,” and she does have family either here or close by in another town as she talks about grand children but never says how many or how many children she and Wayne have. She sounds like a caring person when she does speak of her “Little Darlin’s” but won’t reveal their names because she doesn’t want them to be teased at school.

CLOTHING – She admits to enjoying “. . . cavorting in the sun au nat-ur-al and she visits a nudist campground not to far from Waynedale now and then. We’ll let you know more if and when we ever find out.

We do hope you enjoy reading about the adventures of Mrs. Wayne Dale and we will up date her background as she slips up and lets a cat (more information) now and then out of the bag. You have to love her, eccentric, truthful, and quaint as she is. She is a champion for Seniors.

Mrs. Waynedale
The adventures and reviews of Mrs. Waynedale are written by a mystery author in the Waynedale area. You have to love her, eccentric, truthful, and quaint as she is. She is a champion for Seniors.

The adventures and reviews of Mrs. Waynedale are written by a mystery author in the Waynedale area. You have to love her, eccentric, truthful, and quaint as she is. She is a champion for Seniors. > Read Full Biography > More Articles Written By This Writer