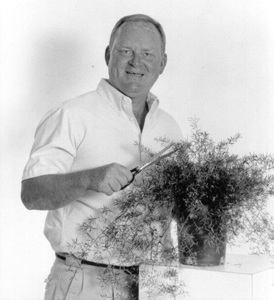 The Japanese beetle is a devastating pest of urban landscape plants. It was first found in Kentucky on the southern outskirts of Louisville (Jefferson County) in 1937. The isolated infestations were treated with insecticides and eliminated, delaying the spread of the beetle. However, populations in the region increased dramatically during the 1950s and ’60s; the Japanese beetle now occurs in all 120 counties in the Commonwealth. Adult Japanese beetles are 3/8 inch long metallic green beetles with hard, copper-brown wing covers. Five small white tufts project from under the wing covers on each side, and a sixth pair at the tip of the abdomen. These white tufts help to distinguish them from similar metallic green or coppery colored beetles.

Adults emerge from the ground in late May or early June. Individual beetles live about 30 to 45 days with activity concentrated over a four to six week period. Beetle numbers begin to decline in late July but some can be found as late as September.

Japanese beetles can feed on about 300 species of plants, ranging from roses to poison ivy. Odor and location in direct sun seem to be very important factors in plant selection. The beetles usually feed in groups, starting at the top of a plant and working downward. While a single beetle doesn’t eat much, group feeding by many causes severe damage. Adults feed on the upper surface of foliage, chewing out tissue between the veins. This gives the leaf a characteristic skeletonized appearance.

Japanese beetles can fly as far as 5 miles but 1 to 2 miles is more likely. Usually, they make only short flights as they move about to feed. Local infestations spread as beetles move to favored food and egg-laying sites.
Insecticides for Japanese Beetle Control

Many insecticides are labeled for Japanese beetle control on landscape plants. Examples include Orthene Turf, Tree & Ornamental Insecticide, Sevin Soil & Turf Insect Killer, Ortho Bug-B-Gon Garden & Landscape Insect Killer and Milky Spore (my personal favorite) which when applied to your yard keeps on working for up to 20 years! Direct spray applications of insecticidal soap kills Japanese beetles on contact but does not provide any residual protection.

Here are some points to keep in mind when using insecticides for beetle control – Japanese beetle flight is greatest on clear days with temperatures between 84 degrees and 95 degrees Fahrenheit and winds less than 12 miles per hour. This can bring new beetles into your landscape to challenge any control program that you may have. When these conditions exist, check plants frequently to see if beetles are starting to feed again.

• Japanese beetles begin to feed at the tops of plants and move down as defoliation occurs. This makes damage obvious, in terms of brown leaves and esthetic damage, but also can pose coverage problems on large trees. Hose-end sprayers may allow applications to reach the target but spray drift and applicator exposure are potential problems.

• Some of the effective insecticides for Japanese beetle control, such as carbaryl (Sevin) and the pyrethroids (permethrin and others) can contribute to build-ups of mites or aphids. Watch closely for signs of these pests and use acephate or malathion if needed. While these insecticides have a shorter residual life, they may help to reduce problems with secondary pests.

Repeated applications may be necessary because of the relatively short residual effect of the products. Also, a significant rainfall shortly after an application may reduce the insecticide deposit below effective levels.

The hard body of the Japanese beetle may make them relatively unattractive to many predators, such as birds and some may be killed by predatory insects but this is probably infrequent. A few species of wasps and flies have been imported (an attempt to control the beetle in the U.S), but with only establishment has been limited, so far.

Hand collecting can be used to protect valuable plants when beetle activity is relatively low. The presence of beetles on a plant attracts more beetles. When you remove beetles daily by hand from a plant, only about half as many are attracted to that plant compared to those on which beetles are allowed to accumulate. One of the easiest ways to remove beetles from small plants is to shake the plants early in the morning (about 7 a.m.) when temperatures are low and the beetles sluggish. The beetles may be killed by shaking them into a bucket of soapy water.

Japanese beetle traps are sold in many garden centers. Commercially available traps attract the beetles with two types of baits. One mimics the scent of virgin female beetles and is highly attractive to males. The other bait is a sweet-smelling food-type lure that attracts both sexes. This combination of ingredients is such a powerful attractant that traps can draw in thousands of beetles in a day.

Research conducted at the University of Kentucky has shown that the traps attract many more beetles than are actually caught. Consequently, susceptible plants along the flight path of the beetles and in the vicinity of traps are likely to suffer much more damage than if no traps are used at all. In most landscape situations, use of Japanese beetle traps probably will do more harm than good. If you experiment with traps, be sure to place them well away from gardens and landscape plants.

Careful selection of plant species when replacing or adding to your landscape is the key to avoiding an annual battle with Japanese beetles. Certain common landscape plants are inevitably attacked and may be poor choices where this insect is abundant. These include Japanese maple, gray birch, rose of Sharon, black walnut, flowering crab, poplar roses, mountain ash, American elm and grape vines.